Sweet Stampin with Lili of the Valley, Cupcake, Crafts & Me 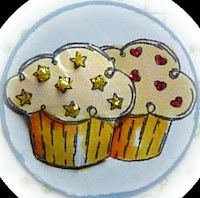 Yipee it's the weekend and time for my Guest spot at

Sweet Stampin
where the theme this week is "Food Glorious Food" and we are delighted to be sponsored by Bunny Zoe's Crafts who have a £10 voucher to give away alongside our monthly sponsor Prairie Fairy who have another 5 digis for the lucky winner! 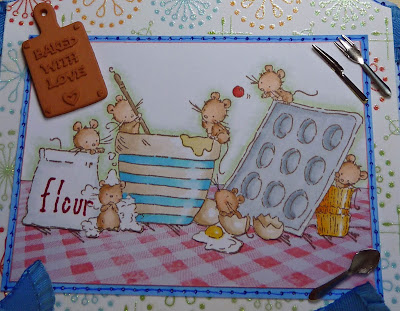 I purchased two baking mice LOTV stamps at the Ally Pally craft fair back when ever it was and this is one of them.  Isn't it just adorable?  And the perfect stamp for our Food Glorious Food challenge this week. So inspired by the giant hearted and oh so talented Vicky who made the most delightful apron card and recipe box set here (you simply must drop by her blog if you get a chance because her work is Delightful),  I made my own apron card. 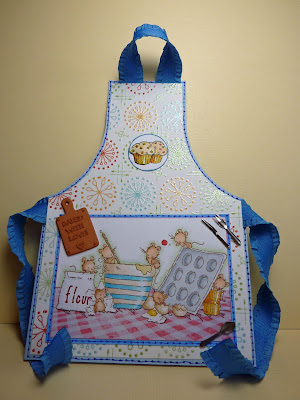 My DP is from a new Kitchen stack by DCWV and I simply cut my apron shape, faux stitched around the edge and coloured up my meeces with Copics and Promarkers.  I added two tiny Prairie Fairy cupcakes as a central button at the top of the apron.  These come individually but I merged two together.   A couple of ribbon ties, some cutlery brads and a little Dress It Up button are the final touches.
The tablecloth is a gingham stamp by Obsession Impression which has been stamped, photographed at an angle and then printed with the LOTV stamped image cut out and layered over it.   This gave it a more tabletop aspect than using the original stamped image because of the change in perspective gained from photographing it.  It's a shame the photo isn't very good quality.  I can't imagine why but hopefully my closeup of the main image is a little better.
I am entering my card into the following challenges:
Crafts & Me who simply want us to "stamp something"
Cupcake Crafts who want to see "things with tails"; and of course
Lili of the Valley who have an "anything goes" theme for their 100th challenge this week.
And now for a bit of news...I don't normally share much about my life on my blog but hubby bought us tickets to see Jonathan Ansell on Thursday evening.  To say I was a great fan of his when G4 were runners up in The X Factor in 2004 would be an understatement. 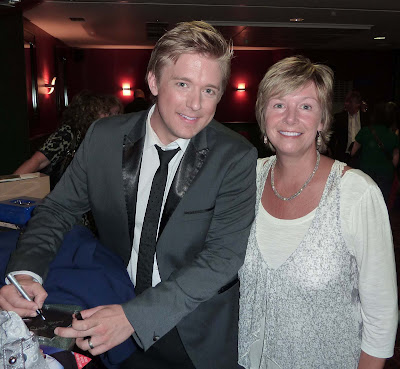 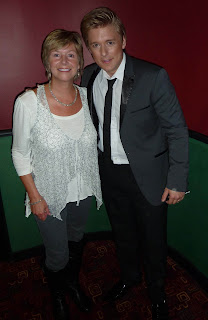 For me, he was the cutest thing on TV since Robert Redford in The Sting! Anyway, we both really enjoyed his concert. G4 broke up unfortunately but he was performing with three other very talented singers, it was a great gig, and we had Meet and Greet VIP tickets so we spent an hour with him before the show. I got an autograph, a brief cuddle and even a kiss and he is still gorgeous!
Posted by Grenouille Greetings at 08:00

Hi Lesley, your card is gorgeous, love the shape and it looks like you had a fab time at the concert.. Thanks for taking part in this weeks LOTV Challenge. Enjoy your weekend
Clairexx

A gorgeous card Lesley, the image is adorable and I love the shape. Thanks for joining us at CCC.

Stunning apron card Lesley and just perfect for our things with tails' challenge this week...thanks for joining in the fun with us at Cupcake :) Donna x

Oh my gosh Lesley!! I've been ooohing and aaaahing over your card!! That is soooo stinkin' CUTE girl!! I love those little mice!! :)

And look at you hanging with da man!! LOL!! How fun for you!! Enjoy your weekend friend!! Smiles

Hi sweetie WOWWWWWWW is this fantastic I have these stamps as well they are just sooooo cute, I have coloured 2 of them up they just need to go onto something now lol. Love love love this fantastic apron hun I feel really honoured you got inspiration from me shug, honestly I'm beaming here lol & blushing lol.
Looks like you had a fabulous night hun.

Gorgeous card, Lesley! The image is adorable and I love the design! Thanks for joining us at Cupcake and good luck! Delphine xx

Gee I love your apron card! Well done. I have admired these cards but have yet to attempt one.The images are so cute and I love your colouring.

What a great creation Lesley.. I love the apron idea. Looks like you had a great time. What a sweet hubby you have..:)

Brill shaped card Lesley and the image is just perfect!! Spot on colouring and great little details like the cutlery and chopping board!! Great pics of you and Jonathon - looks like you had fab evening!! Juliexx

Hey girl! I'm not really sure who that guy is or G4 but he is cute! haha!
I have to tell you that your card is over the top ADORABLE! The image fits perfectly on that apron!! CUTE!
Hugs, Dena

wow what a fab creation !

looks like a fab night .
thanks for joining us at lili of the Valley this week .
hugs
maddy xxxx

This is gorgeous Lesley. Love that stamp. Hugs Tracy x

Totally ADORE the apron! I wanted to let you know that I featured it in my "fave cards" section of my blog. TFS!
http://dorcasdesigns.blogspot.com/p/fave-cards.html