This week's challenge at Mo's Digital Pencil is Fantasies & Fairies.  I made one of my most favourite cards here just a couple of weeks ago using Mo's white rabbit from Alice in Wonderland called "Late".   I actually liked it so much that I've decided to keep it.  I thought I might get a shadow box frame and pop it on the wall in my craft room.
It was hubby's birthday yesterday and, in keeping with the fantasy challenge, I chose to make him a similar card but this time using Mo's Mad Hatter which was a gift from best matey, Julie.  Now Mo doesn't allow sharing of her images - quite right too! - but Julie purchased this image twice by mistake and she asked Mo if she could give one of them to me.  So thank you Julie for this (and any future craft-purchasing mistakes you might make!) and thank you, Mo, for agreeing!   I like this card very much too and whereas I actually did give it to hubby for his birthday, I intend to take it back in the New Year and add it to my Craft Wall!    I have a sneaky suspicion that I might have to buy the Queen of Hearts, Tweedle Dum & Tweedle Dee and maybe Alice too! 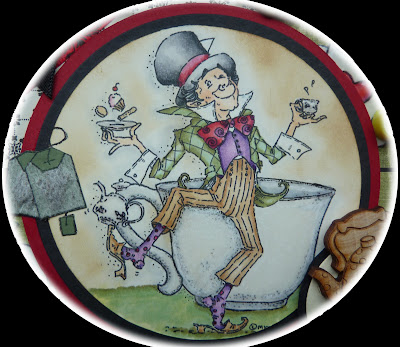 I used K&Co papers again and the same basic sketch, altered slightly.  I liked the idea that this card would match up well with my previous one.  I was surprised by how many tea-type images and accessories I had.  The cups and sentiment are from a Fiskers set but I actually drew the one behind the Mad Hatter myself.  All of the crockery is glazed and it is such a shame that doesn't show up in the photo.  My favourite bits (apart from the image itself, of course) are my home made teabags.  Fiskers had a tea-bag stamp in the set and I stamped it on an actual tea-bag as well as on to some green card stock.  These home-made embellishments actually contain real tea! 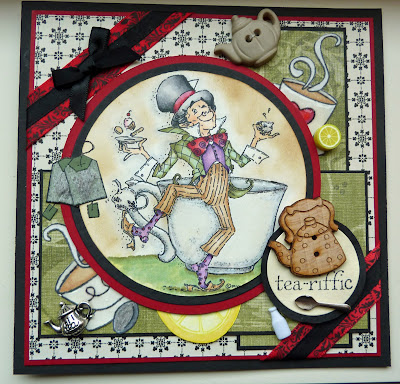 On the inside it says "You're tea-riffic and I'm mad about you!"
Posted by Grenouille Greetings at 13:04

You have done such an outstanding job. You have given your card so many wonderful details...I LOVE the papers and those embellishments!Wow Your hubby will love it that is for sure!

Hi sweetie this is bleeding fabbylicious...its just gorgeous. I have this image & all the others I actually only went over to buy 1 of them but couldn't decide which I preferred so I brought them all I'm on making my project with them just unfortunately this ickle thing called crimbo keeps getting in the way & distracting me....darn you St Nick lol. Anyway I'm certain your hubby would of loved it you may even have a struggle to get it back off him lmao. Take care hunni.

Hi Lesley, this is so very gorgeous, it must have taken a while its gorgeous. hugs chris xx

This is a gorgeous card. I can quite see why you want to keep it for yourself.

Oh this is amazing Lesley, love the image and all the fab details.
luv
debby

Leslie, what an awesome card. Love the colors and your buttons are perfect! Thanks for playing the Mo's Digital Pencil Challenge.

Hi Lesley,oh wow this is so pretty,I love this image
Think your hubby will love this.
Thanks for your kind words
Hugs Heidy

Such a cute, clever card! I love all the embellishments. Thanks for sharing it with us in Mo's Challenge.

hi lesley
wow what a fantastic creation,the image is goregeous and as always the embellies are perfect
i hope you have a very merry christmas and a happy and healthy new year
tracey x

Hi Lesley - this is a stunner!! Love your design and so many wonderful design elements!! Must use this image - you've totally inspired me!! Juliexx

Wow.. love your card and this image is perfect for the fairy and fantasy challenge (I used it too!) Thanks for joining us at Mo's challenge. Happy New Year to you, Lesley!

Wow - cool picture an a wonderful composition at your card. The little spoon - soo nice.