It's Saturday which means another fab sketch from
Sketch Saturday
Where we are lucky enough to be sponsored by...
My Mum's Craft Shop
who are having a
WINTER SHOP SALE
on
Saturday 15th December
Starts 10am
Everything discounted from 10% up to 50% off!
For ONE day only
In-store only
Don't miss out
It's Steph's week this week and she has come up with a fabulous sketch which has enabled me to 'speriment with a design I have admired in some of my blog buddy's work where their paper panels are sticking outside the main body of the card.  In order to achieve this I had to make my paper panels much larger than they appear in the sketch and they are not symmetrical but hopefully Steph's sketch is still visible under all of the bits and pieces I added to my creation. 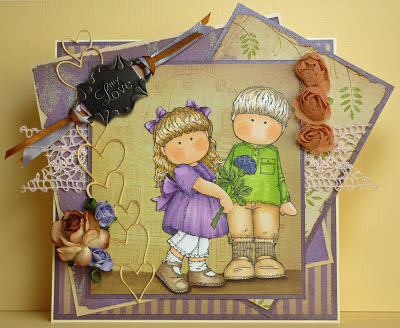 I used a new addition to my DCWV papers called Chateau Lavender.  I think these papers are soooooo pretty. I even distressed them which is very unusual for me.  My card is for The Hubster for our anniversary and hopefully he won't look at my blog before I give him the card  in December.  I used two hAnglar images that I bought at least a year ago (maybe two) and which have never seen ink and I coloured them in Copics.  They were fiddly little figures to cut out and I should have merged them together when I stamped them so as to avoid having to cut around the flower and leaves but hey ho...best laid plans and all that.  I mounted them on a vintagey picture that looks so much like Prague where Tom and I have spent many a happy time.  You will need to click on the image to make it bigger so you can see it.  The characters are so large that most of the picture is obscured but I look forward to standing in Old Town Square with Tom next time we go and pointing out the view that almost exactly matches the picture on the paper even though, judging by the name of the paper pack, I think the picture is of somewhere in France! 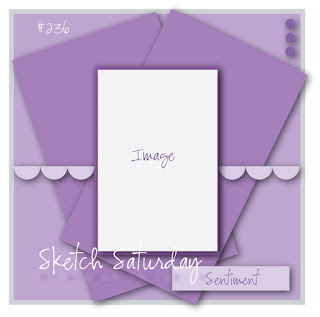 I added a little bit of lace (thank you PQ!) and some lovely flowers (the ribbon of roses and the large brown flower are from Wild Orchid), a Memory Box heart strand which I cut using best mate Julie's die last time she came to play (thank you Julie!) and my sentiment is a metal embellishment from Making Memories.  I had to move my sentiment to the top left - sorry Steph!
I am entering my card into the following challenges:
The Ribbon Girl "Lavender Hues"
Crafts and Me "Ribbon or Trim"
Simon Says Stamp "Anything Goes"
My teamies have provided lots of lovely inspiration.  Do pop by and share some love with them and then come and play along.

Posted by Grenouille Greetings at 08:00

Love your color palette. The combination of embellishments is so romantic, but not sucky sweet. Tom will love it, especially when he reads the story that goes with it. Congratulations on keeping the spark alive!

Love this one very much and I am sure your hubby will too!!

Gorgeous colours and I love those scrummy hearts .. .. so many beautiful elements!

Hope you are having a lovely weekend.

another fab card Lesley,
love everything about it! fab caombo and coloring
hugs
céline

so stunning lesley.really gorgeous design and i love your colours and sweet image.
thanks for joining us this week at the Crafts and Me challenge :D

Absolutely love your card Lesley and what a great idea for the layers to overlap the card.
luv
Debby

This is so gorgeous and sweet Lesley!!!
Beautiful colours and romantic image! :)

Not only is this adorable but it also made me smile. Packed full of delish details and super colours. Yummy. Now, don't tell anyone, but I'm starting to feel a little panicked by the date... XX

Love your take on the sketch and those new papers are a gorgeous shade of lavender. Your coloring of these cuties is fantastic and love the memory box die cut! Beautiful card

Lesley, this is so adorable!! I love the sweet children and your coloring!! What a fantastic take of this sketch my friend!! HUGS :)

Cute image, love the heart die and your coloring. Thanks for playing along with the Anything Goes Challenge over on the SImon Says Stamp Challenge Blog this week!

Wow, just fabulous!! Love the layout and I, too, love this off the page style - you've carried it off beautifully! Loads of lovely embellies too! Hugs, juliexx

Lesley, your beautifully colored Hanglar couple looks wonderful on this fun over-the-edge card. So glad to see your entry at the Crafts and Me Stamps digi team's "Ribbon or Trim" challenge. Hugz, ~ Rose

now this is adorable!! Loving the colors you have used..
JUST BEAUTIFUL as always!!
hugs.....