When our Son-in-Law's sister discovered she was expecting a baby girl, she asked if I would make a card for the baby like the one I had made for our Grandson; her nephew.  I made his card over three and a half year's ago in my early crafty years before I was doing so much colouring.  The noticeable feature of my original card is it's size.  It was made from a folded sheet of A3 so it measures 11.7 x 8.3 inches and being a rectangle - it caused me some problems.  I'm definitely a square kind of gal! 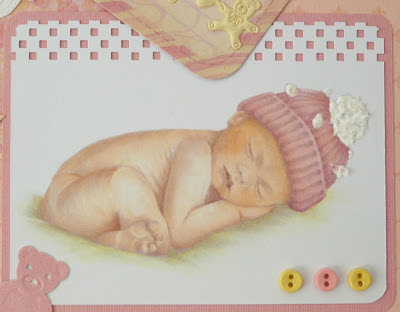 I started with this absolutely fabulous Sugar Nellie image called Bambino which you can buy here and coloured her with Copics, adding some liquid applique and fluffy stuff to her bobbles.  I made baby's cheeks too dark and now her face is a bit dark in comparison with her body. It's such a versatile image, though - a blue hat makes for perfect gender change! 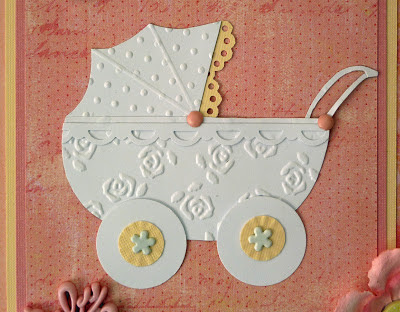 Then I made the pram.  It's from a template I bought from AnnaMarie Designs.  I embossed the bonnet and buggy with Cuttlebug folders and added an MS lacey punched yellow frill and a white SU punched trim. 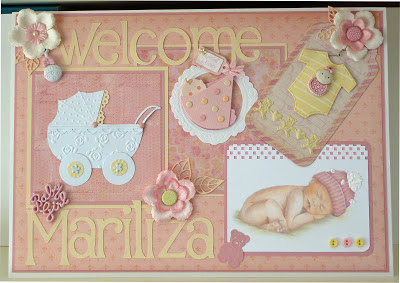 Then I raided my stash draws for baby girl pre-made toppers, buttons, ribbons and flowers before cutting out some letters on my Cricut.  The smaller DPs are Prima Annalee and the background DP is K&Co (as is the tag). The little teddy by my image is an MS punch, the skeleton leaves by the flowers are Marianne dies and the blanket edging above my image is from an EK Success punch. 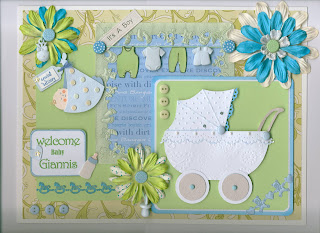 And this is the one I made for our Grandson such a long time ago which inspired today's card.

I am entering my card into the following challenges: Tuesday Throwdown for "lots of layers";

Posted by Grenouille Greetings at 15:03

Oh that is so sweet Leslie as is the one you made for your Grandson.
Hugs
Jane

Girlfriend this is fabulous. It will look so cute on display in the nursery. Your grandson's is precious too. You were born to craft. Your early pieces are as fabulous as your present day creations.

Hi Lesley, oooh they are both beautiful cards! No wonder a similar one was requested a second time.

They're both adorable Lesley. :-) All the fun little added embellies go so well with that sweet little baby image and the cute little pram. Hugs!

AWW!! How precious these are Lesley!! Love your different color designs and your personalizing makes it even more special!! LOVE IT!! HUGS :)

Tee hee Lesley .. .. I have to admit to getting on better with square cards too!

Loving both your recent and early make. That baby image is just gorgeous and I love what you have done with it and all the cute embellishments.

WOW this is stunning and so was the one you did a few years ago.
luv
Debby

This is absolutely gorgeous sweetie I lurve this baby image she is adorable. Love your older as well it really is fab!!

Ooh Lesley your little baby cards are just beautiful...I have colouring envy now...you did a fantastic job on the shading with those copics
Tracey x

Oooh this is just so gorgeous and adorable Lesley!!!
Love your Grandson's card as well! :)
Have a lovely day.

Oh wow! every one of these are stunning! Each is just so sweet and I love the layers. Thanks for sharing at Tuesday Throwdown.
Hugs,
Larelyn