This week at Stamptacular Sunday Challenge we are going sentimental with the theme of “Just Sayin’!” and we would like you to create a card or project with some sort of sentiment/words on the front!   Super easy one this week!  Once again The Stamping Boutique are offering 5 fabby digis to one lucky winner so do join us!
For my Father-in-Law's 90th birthday I have made him a card shaped like a champagne bottle which is almost real bottle height.   I opted to cut this in four separate bottle-shaped panels out of DCWV card stock two of which are green for the outside and joined together with normal sticky tape on the inside and then the other two are cream for the inside and glued over the top, concealing the tape and giving the panels more stiffness.    I used my Cricut to cut the bottle panels, welding a tag shape with a tall cylinder and a circle at the top of the cylinder.   I cut the "shoulders" of the bottle by hand afterwards.
Before adding my decoration I masked off some highlights on the front and back green panels with a curved shape and then inked all around the outside edges of the mask with a darker distress ink.  After removing the masks, I added some extra white highlight with my white pen.   My highlighting is mostly covered up on the front panel but is still visible on the back one. 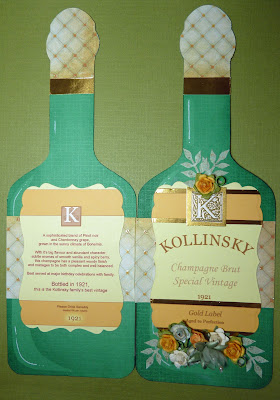 I wrote some text including his surname "Kollinsky" and printed it onto cream and saffron card stock and then added some gold mirror card for layering before cutting out the whole thing with a Nestie labels die.   For our challenge we mustn't forget to stamp!   After all, we don’t call this STAMPtacular for nothing so I heat embossed the letter K from an alphabet stamp set with gold embossing powder and added it to the top of the front panel.  I've had the set for ever, only used it once and I'm afraid I don't know the make.  DCWV paper from the "Rustic Stack" is beneath the labels helping to add strength and join the panels together and has also been cut for the top of the bottles to mimic a champagne cage over a cork. A little extra gold mirror card mimics the foil beneath the cage.   Lots of lovely flowers and a few leaf branches finish the embellishment. 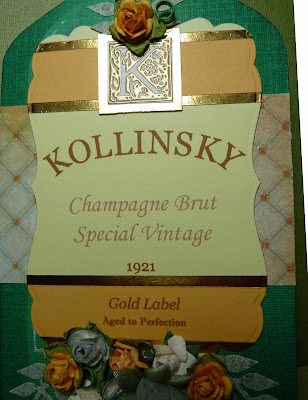 I looked up some wine descriptions on line and then made one up of my own for my FIL.  His birth year is obviously 1921 and he was born in the Czech Republic (Bohemia) and I have tried to express in flavours how he might like to view his own personality.  I realise now, having written this post that my photos are not terribly good quality but it's too late now to correct them.  The card is with Papa. 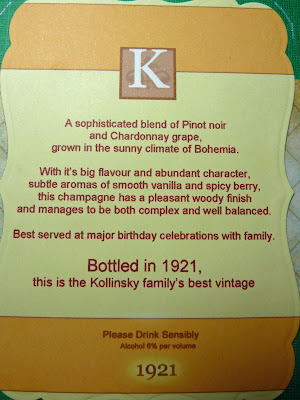 For any wine officionados out there, I have been told that champagne with only 6% alcohol content is not going to get anyone dancing on the tables.  15% would have been more accurate but Papa doesn't know that and neither did I when I was typing my text.  In any event - it's probably best that he didn't dance on the tables - his walking frame might have knocked over the glassware!

This post is scheduled as I am out today but I will be entering my card into the following challenges:
Simon Says Stamp - who want our project to be "inspired by a song or a film title".  I think Alfred Hitchcock made a silent film called Champagne about 100 years ago but actually I was thinking more of Oasis "Champagne Supernova"!
Totally Gorjuss - where the theme is "nothing square about me"; and
Cute Card Thursday have an "anything goes" week

Posted by Grenouille Greetings at 11:00

WOWWWWWWWWWWW.....sweetie this is awesome & I was gobsmacked you had done the back as well it really is fabulous.......you are so clever hun & a fab inspiration!!

thanks for joining us on the Simon Says Stamp Challenge :-)
luv
Lols x x x

I'm speechless with admiration! This is so gorgeous and so special for your FIL. Hugs Mrs A.

Just brilliant! So love your clever idea and love the text!
Many thanks for joining us at Cute Card Thursday this week!
Have a great weekend, happy crafting, Debxx

Hi partner in crime!! Wow, Lesley - how creative is this!!! Love all your attention to detail and all the special references to your FIL!! Simply wonderful, as are you! Had a great day today, love being with you and putting the world to rights! Not unpacked any of my goodies yet, craft room is a tip but have finished one card and nearly finished another!! Mwoaahhhh! Juliexx

Thanks for capturing our challenge at TG so perfectly this week Lesley. A wonderful card! hugs Sharon

Oh Lesley, you are such a clever crafter hun!! Love how you've put this together!! Really gorgeous!! ;)

What a great idea for a shaped card. Love it! Love the little personalised touches you've added too. Thanks for joining us at TG this week.