A Stamptacular Winter Wonderland full of All Creatures Great and Small

The Stamptacular Sunday Challenge blog have a "whateva" theme this week with a by-line that reads "do something out of the ordinary but don't forget to stamp".   Winter Wonderland are captioned "My sentiments exactly" and they don't need a Christmas card on this occasion.  Sir Stampalot want to see "all creatures great and small". 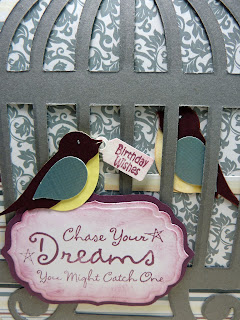 So I did something out of the ordinary and the only stamps I used were for the sentiments.
This card is for our son-in-law, a delightful young  man who turns his hand to everything.  In the last couple of years we have helped him build his dreams with a little cash injection but he has worked his socks off to realise them.

I don't know anyone who works as hard as he does and he is a great husband and father too.  We love him to bits. 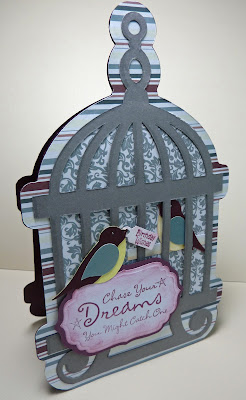 I think if I were to try and do something similar to this card again, I could probably improve on this.  My Cricut was being a wotsit and in the end whereas the Cricut scored the design, I had to cut the birdcage and dark card base with a scalpel so it's not terribly neat.  DPs are Papermania and the birdies are punched with an SU punch.  I punched each bird twice and then cut off the tummies to layer them up so that they would have contrasting colours for their breast.  The focus sentiment is by TPC Studios and I think the little one is Stamps Away cut with an SU tiny tag punch.   The card opens from the top and the insert inside is shaped like an arch.
Posted by Grenouille Greetings at 11:37

fab card, love the shape!
thanks for playing with us at stamptacular sunday this week
hugs
céline

Lesley this is absolutely gorgeous! I love the shape, how unusual and the colours and design are beautiful!
Hugs
Linds x

Stunning creation, perfect for our challenge this month. Thanks for playing along at Sir Stampalot this month.

Fab creation! Thanks for joining us at Sir Stampalot and good luck!

Hi Lesley,
WOW! This looks sensational. How wonderful to be so well appreciated by your in-laws. I won't tell you what I've received off mine in the past, when they've remembered!!! Love those beautiful birds. Hope you're keeping well.
Big Hugs,
Andie xx

Oh this is brilliant Lesley, love the birds.
luv
Debby

This is brilliant Lesley! I adore the shape of this card - so clever.
Thank you for joining us at Sir Stampalot this month.
Clare x

wo Lesley from were I am looking I dont see any scalpel marks it looks perfect and a very clever design too. love it.
Thanks for joining us in the Sir Stampalot Challenge. hugs Chris xx

WOW....this is awesome hun I adore the shape its fabulous the design is totally gorgeous.

Wow this is absolutely fabulous what a great design I love it thank you for joining us at Sir Stampalot this month.
Hugs
Lorraine x

What a great card! Thanks for joining in the Winter Wonderland Challenge this week.
Hugs Lynsey x

Awesome shape, Lesley and love your little birds!! Sure you SIL will be thrilled with it!! Juliex

Thank you so much for participating in our "Whateva!" challenge this week at Stamptacular! Your submission is absolutely wonderful and so inspirational!

Also, in case you're interested, we're in the middle of a DT Call and would love for you to apply! You can find detailed information on what is required and how to apply on our Challenge Blog...http://stamptacularsundaychallenge.blogspot.com!

Thanks again for joining us this week at Stamptacular! I hope you'll join us again soon for some more challenge fun!

What a lovely shaped card
Thanks for joining us at Sir stampalot this month and good luck!

You are just too creative! It makes me jealous to see how many fab and different things you seem to be turning out every day! *g*
No, honestly, it's fab and I admire your talent!
Lots of love, Alex