Having resigned from the Sweet Stampin team because I felt like a bit of a break, I now find myself missing them but at least I can still play along.    This week they want us to "Try something Different. The challenge at Charisma Cardz is "Celebrations".  They are celebrating a birthday (as is the recipient of this card) with a blog hop.  My card is for a special friend, David, who has just got back to work in an IT role after a very long time.   Stamp Something and Kaboodle both want us to use a digi-stamp and I used Kenny K's Briefcase Hero, coloured in Copics.  I quite often use Photoshop in my cardmaking but this is the first time I have merged a digital image with a photo as a background.  I made the window open (it was closed in the original photo) and darkened the sky for night.  I inserted a picture of David's son as a screen saver on the computer behind the chair, merged my uncoloured image and then added some foliage over the top of his briefcase to make it look like there is a pot plant in front of the window.  I see now that having cropped the image too much, it actually looks like a tree is coming through the window but never mind. 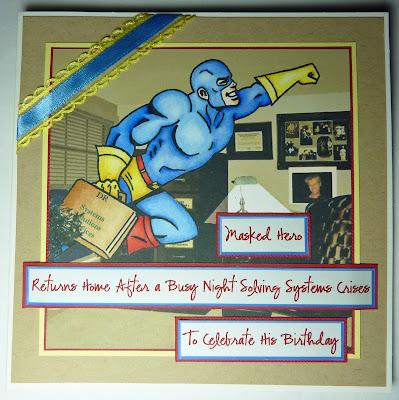 It's supposed to look like David - the Masked Hero - is just flying in .    Hopefully it will make him smile although I am not sure how he will feel being depicted in red boots and wearing lemon-coloured underpants over blue tights! Fashion nightmare!
The sentiment is obviously Word processed and I have used Kraft for the first time as a background.  I like how my hero stands out amongst the softer Krafty tones of the paper and background.
I'm off to hop now with Charisma...
Posted by Grenouille Greetings at 21:17

sorry to hear you have stepped down! this is a fantastic male card I adore the comic strip feel about it. Great work and your friend returning to work after time out will love it too!

This turned out great.. Love what you did with the computer screen.. This is wonderful.. Great job.

Really clever card, lots to look at!! Thanks for joining in at Kaboodle Doodles this week. Jill

Hi sweetie missing you over on the DT :0( This card is fantastic you have done an awesome job of this I would have no idea....you know me thick as a warburtons loaf!! I'm going have to go have another peekskie cus its just fabulous, all of it!!!

Hi Lesley, its great, love all the different features in this card, lots to look at, i am sure he will love it. hugs chris xx

fantastic work lesley,i wouldnt know where to start
congrats on your win at http://jacqui47.blogspot.com/
the lotv stamps are stunning well done
tracey x

Brilliant - you are such a whizz with photoshop!! The combo of photo and yoru image works perfectly - spot on colouring too!! Juliexx

Oh this is brilliant and I am sure your friend will love it even if he is wearing lemon coloured underpants.

I'm sure the hero status and those muscles will wipe away any worries regarding the pants, boots and tights LOL!!!

Such a personal card I think he will be well impressed.

Pleased your friend has managed to get back into IT after his long break.

OMG!! This is so fun!! What a cute image and fabulous idea!! :) Thanks so much for sharing this with us at Stamp Something this week!!HUGS

How clever are you inserting the digi image on to the photo like that - very clever - I wouldn't have a clue where to start! A fun card and I'm sure David will love it. Thanks for joining us over at Kaboodle Doodles and good luck.

Wow,what a card! I love the techniques you used and it's makes such a wonderful card. I'm sure he will love it as I know I do! Thanks for joining us at Kaboodle Doodle this week!

I am SO impressed with your image - how on earth you did that on the computer I will never know, but it looks brilliant! Great to have you playing along at Sweet Stampin' this week! Tracey x