Tragically I lost my father in 2004. I miss him every day.

So when I make a Father's Day card for my FIL I always heap twice the amount of love into it and hope that my own father is somehow aware that much of that love is for him. Tom's Dad's history is, however, very much in evidence within the design of this year's card. John will be 90 on his next birthday and although his life has been good in the last 60 years or so, his formative years were blighted by war.

Born in Prague in what was then Czechoslovakia, his parents and young sister were taken by the Nazis and died in a concentration camp. John was a very young man in the British army at the time. Later, his home and the business he would have inherited from his father was siezed by the Russians in the communist occupation. The drawing of the building on this card is the premises in which John grew up and the shop on the ground floor was owned by his father. I chose the image of the man (a stamp by Beryl Peters for Personal Impressions) specifically because he is clearly from an older era and layered my card with DCWV papers from the Rustic and the Linen Closet collections. The Happy Father's Day stamp is by Inkadinkadoo. It is enormous so I scanned it after I had stamped it and then produced a much smaller electronic version.  I stamped some plain cream card with Versamark using a Fiskers Heritage background stamp, embossed it with clear embossing powder and attempted to distress the whole card with a variety of brown Ranger inks, smudging a few small partial swirls to some of the edges to further age it. Finally, I added a warm gold coloured organza ribbon over the man and added a bow. This card is about as "artsy" as I am ever going to get and I really like it.  John's heritage is so important to him and he has instilled his love of the Czech Republic in his son and his grandchildren. He regained his home and the shop premises after the Velvet Revolution and visits his home regularly. 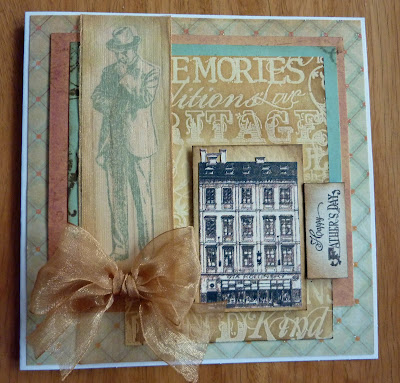 The "sketch" is challenge 106 from Friday Sketchers and was a peach to use. I am also entering the card into the following challenges:
Cupcake Craft "#95 one for the boys";
Cardvaarks "wet/dry embossing";
Stamptacular "#63 a tribute to all fathers" has to have a man on it (we get two entries if it's for Father's Day)
Totally Gorjus "#34for the boys"
Paperplay "#23 home" (the building was John's home)
Stamp Challenges "happy somethings" (in this case - Happy Father's Day)
Posted by Grenouille Greetings at 10:27

a fabulous card with such love and attention to detail coming through.
hugs, annie x

What a fantastic card, love the vintage feel and all the little details...the bow is gorgeous! I'm so glad you could join our challenge this week at the Stamptacular Sunday Challenge!
Pleasantly,
Paula

This is absolutely stunning. I love all the attention to detail..you can just tell it has been made with love

This card is more than just a tribute to your father in law - it's show's him great honor and respect. Bravo! This card is breathtaking! Thanks for joining us at SSC this week...hugs...Barb

Absolutely stunning, Lesley!! You've captured 'artsy' perfectly!! Fab layering and colours and the bow finishes off beautifully!! This is a real labour of love and your FIL will truly appreciate all the work and feeling that has gone into making his card!! Juliexx

Fabulous card Lesley made it more special by reading the history behind it.
luv
Debby

Wow, Lesley - what a story. I'm so glad John is getting such a special card - it will have such meaning for him. And it's a beautiful card, too.

Thanks for sharing it with us on PaperPlay this week.

Well done Lesley. Great card, and I am sure your father-in-law was thrilled at all the detail. It must have taken you so long, I hope that, as my mother has done for years, brings out the card every year from now on ad infinitum. Love Gilly x

What a lot of love and attention to detail has gone into this card, I should think it will be treasured. Fantastic work.

What an awesome card and brilliant post. What a history.

I know exactly what you mean.

I lost my Dad in 1991 - and he was my hero. I miss him every day too - but sometimes (if I am very lucky) I dream about him and it is as if we are together again. I always tell him I miss him and he replies "I know you do". This makes me feel like he is still part of my life.

I think of him as I go to sleep in the hope that I dream of him.

So much has happened since 1991 that I would have loved to share with him and that he could have helped me with - but we all have to grow up sometime I suppose.

Your card is gorgeous and is clearly full of love. I am sure your FIL will love it.

Hello Lesley,
what a wonderful and emotional background for your card! It is very clear how much love has gone into its creation and I think you should do artsy more often because it's stunning!
Love and hugs,
Alex

What a beautiful card Lesley. I'm sure your FIL will treasure this wonderful card and appreciate the effort you have gone to to create a card with his heritage in mind,
Love Sarita xx