Caardvarks with Basic Grey and Stampavie

I was really busy with work in early April with no time for blogging although I did squeeze in quite a bit of necessary crafting; making cards needed for April and May. We were due to go to Florida on 15th April on a flight leaving Gatwick in the early afternoon. That was the day after the night of the unpronounceable Icelandic volcano eruption. Our carrier told us to come to the airport; we checked in, made it through security and spent the requisite three hours waiting before the last call to the gate.
We then went through the gate, out the other side, through passport control, baggage reclaim and customs before returning home five and a half hours after having set off!
"Never mind" I said to hubby. Being a very scared flier at the best of times I confess to having been horribly undone by the two hours of TV news I had watched before leaving for the airport with report after report informing viewers what happens to an airplane’s engines when they come into contact with volcanic ash dust. I had no idea that a jumbo might take twenty three whole minutes in complete darkness – that’s 1,380 horrible seconds – to descend 37,000 feet without engines - and frankly, I didn’t really want to know. I am a girl who is appalled at the thought of a three minute roller coaster ride where one can pretend to be in danger. The thought of knowing you’re probably going to die for 23 minutes is just too horrible.
Anyway, on the way home from the airport, we booked ourselves on another flight which was also cancelled and we finally got away just under a week later, on the first open-skies day, when the volcanic ash models looked as though the cloud was all the way to Canada! Needless to say, my flying time in both directions was uneventful but nonetheless decidedly unnerving.
It’s a good thing we had such a fabulous holiday even though all of the arrangements we had made for the first week were completely ruined on account of the fact that the family we were due to be with, were coming home just as we arrived in Florida. Hey ho! It could have been so much worse had disaster struck and it was much worse for many, like some friends of ours, who were stuck outside of the UK in a less than friendly country.
It’s good to be back! 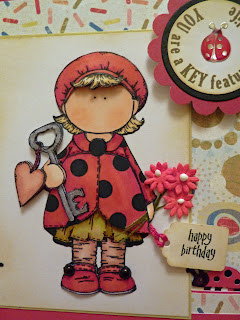 It is best matey Julie's birthday this weekend and this is the card I made for her using a little hAnglar image, my new MS ladybird punch and lovely papers from Basic Grey. Their challenge site wanted us to "punch it out".  I followed one of the great "sketches" over at Caardvarks which has a fabulous prize on offer this month and the theme at Stampavie is for a "birthday card for a girl". The little sentiment on the left is a new one I picked up in the States by TPC Studios.     I made the circular sentiment on the right myself with my label maker and hours of Photoshop just to colour the text. The little girl is coloured with Copics and decoupaged (hat, hair, coat and key and her shoes) and I'm sad that all the layering doesn't really show up in the photo.   I gave her a bouquet of flowers and a tag to hold in addition to the key and heart she comes with and I finished off her shoes with little pearls, coloured black with peel off colouring pens. 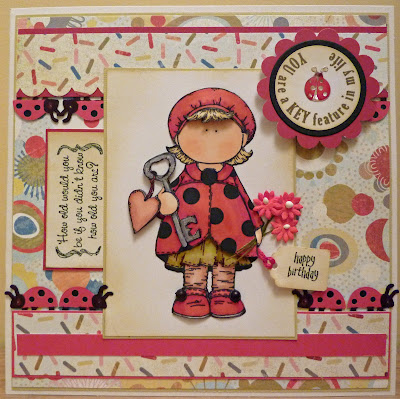 I haven't done any colouring for about three months and I really struggled with this so I shall have to practice some more and make more cards.  I also separated the ladybirds and coloured their faces, punching some of them on the right side and some on the wrong side of the red card so that I could have them facing both ways and I  backed them with little black semi-circles.  You can double click the photo for a better view.
Since our return, I have tried really hard to pop over to your blogs, take a peak and leave some comments. I had to catch up on work though and I know I haven’t got round everybody yet. I promise to pop by soon though and for those of you sent me notesin my absence asking if I was okay – Thank You! That was genuinely sweet of you and much appreciated.  Thank you so much for stopping by!
Posted by Grenouille Greetings at 14:09

Oh this is so utterly delicious Lesley!
I love her and your wonderful design!
hugs
kim x

Oh Lesley it is so good to see you back making those gorgeous cards! You put so many little details into your cards. I had to take a minute to take it all in and totally admire it all!!! I love the layering of the Hanglar image, and her little bouquet of flowers is so adorable! Love the sentiment on the top right...so well done! Great idea!

Good to see you back in production mode.

That's the trouble with going away .. .. the catching up afterwards!!!

Your card is gorgeous. I love all the detail and those great little ladybirds!

Have a great Bank Holiday break!

So nice to see you back in Blogdom. Your holiday sounds lovely and thank goodness your flights were uneventful. As for this scrummy creation, well, it's scrummy! Love the dp. Your colouring looks fine to me. Have a brilliant weekend. x

Hi Lesley
pleased to ssee you back with this wonderful creation, its perfect.
hugs chris xx

Lesley - this is truly fabulous - thank you so much!! I tell you, the attention to detail is amazing from the decoupage - I love her little fringe, to the sentiments - right back at you!! Couldn't ask for a better friend - only known you 37 years!!! Juliexxxxxx

Beautiful card Lesley, it's good to have you back with us.
So glad too you had a lovely holiday,
Love Sarita xx

oh this card is so adorable!! i just love your enthusiasm!!! Thanks!

Hi Lesley, BEAUTIFUL card!! I love all of your little details..

Thank you so much for all of the very nice uplifting comments you have left on my blog. You so sweet!
hope you day is great.
hugs, Janiel