Our Greek Son-in-Law's 40th birthday is coming soon.  He is in the printing business and a lot of his work involves taking photos. 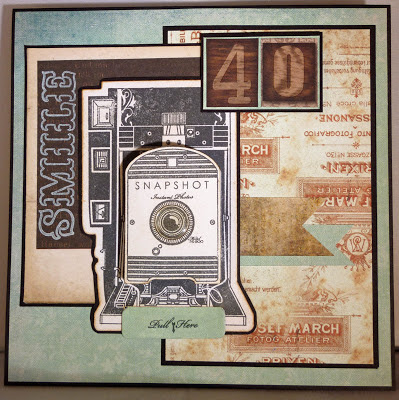 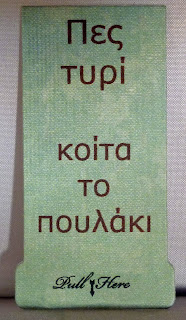 I have made him a card using PTI's Shutter bug stamp and die set.  I think my texted paper is Basic Grey but I'm not entirely sure as it had fallen out of the pack.  The "40" and the polaroid images are cut from a DCWV stack.   I stamped a Fiskars "Smile in white ink on the polaroid and added a pull out tag where the photo would come out of the camera.   The die to cut the camera comes with this pull out together with the "pull here" phrase.

I am hoping that when pulled it reads in Greek "Say Cheese" and something like "Wait for the Birdie"  which is what the Greeks would actually say instead of "Say Cheese".   I cut out an extra front of my camera and mounted it on a 'book leaves' construction.  You can't really see it in the photo but it is intended to mimic the concertina extension of a camera like this as seen in the picture below. I am entering my card into the "Anything Goes" challenges at
One Stop Craft and Bunny Zoe's
and the "Literary Inspiration" Challenge at Make My Monday
I have a choice of literary inspiration...
"An Imperfect Lens" by Anne Richardson Roiphe, or
"Shutter Island" by Denis Lehane, or
"Snapshots" by Joyce Carol Oates and Janet Berliner

Posted by Grenouille Greetings at 15:28

I am sure your son in law will love it! You've done an amazing job.
Hugs
Jane

A fantastic card Lesley, superb papers, a great detail and such a wonderful camera with your fun hidden message.
Don't ask me which are Basic Grey - I dropped my whole box full that fell apart - now I haven't a clue who's who!!!
hugs
Heather xx

So interesting. I love the pull out Greek sentiment. Your SIL should feel well loved by the thought put into this BD card.

so stunning Lesley. I love your vintage colours and really fab design :D

Ooh! this is fab Lesley. Love the vintage design.

What a cool card! LOVE the pull down--so clever! Thanks for joining us at MMM! :)

Awesome idea for your sil's card and I totally love that you added the concertina fold for dimension Lesley. Great card! Hugs!

I am always intrigued when I come to visit your blog as you make such inspirational cards.

They always have special quirky (in a good way) elements and features that are clearly so well thought out and personal to the recipient.

When you make something so special and personal it must be so hard to follow it up the next year!

Hope you are having a good week.

p.s. Pleased you chose the Hubster over the craft stash!! LOL!!

what a perfect card for your son in law. I'm loving it and it is not even for me!! Only 3 more overs!!! hugs Mrs A.

Oh wow!! I love the images!! Really awesome idea and I know he'll just love your creative process behind this!! TFS!! HUGS :)

Absolutely marvelous! this card and your blog!
XO SanDee1899
http://www.sandee1899.blogspot.com

Brilliant and innovotive as always, Lesley! I'm sure your SIL will love it! I love the dimension and the little pull out tab! Great make! Hugs,Juliexx

A clever original and personal card, well done. Thanks for sharing with us at MMM. Caz

Thanks for joining in with our MMM literary inspiration challenge.
Fliss x