Less is More except where Cupcakes are concerned

I had to make a Thank You card for my kitty's lovely special Auntie in Chief who provided primary care for  him while I was in Florida.  Kitty brought Chief Auntie a rat while I was away much to her considerable upset and she had to call in reinforcements in the form of Auntie 2 (my cat's secondary carer) to get rid of it.    According to Auntie 2, said rat was probably already dead long before my cat found it.
I decided to make a Halloween themed card in keeping with Cupcake Craft's "Witches and Pumpkins" theme and I loosely interpreted Sketch 7 over at Simply Less is More.  I used Orange as one of my colours  from the selection of "orange, purple, lime green and black" at House Mouse & Friends HMFMC131
and I'm entering my card into the challenge at ABC which is "Z is for Zoo". 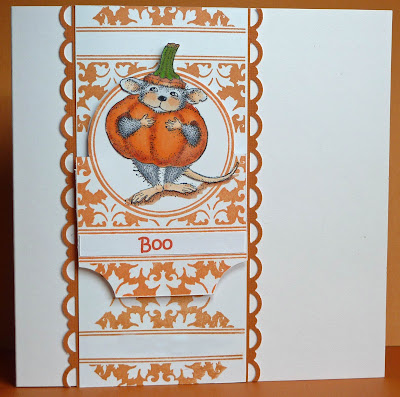 I have had a lot of unpacking to deal with.  I'm still not 100% recovered but I am getting around to visiting my blog buddies.  Thank you for your patience and thank you also for your well wishes.  They really helped!!!


Posted by Grenouille Greetings at 21:50

What a cute mouse!
Love the colour choice too!
Thanks so much for joining us.
Chrissie
"Less is More"

Love this little pumpkin mouse. The border is so nice too. Great Halloween card. Thanks for joining us at the House Mouse and Friends Monday Challenge and Blog Hop. Hope your hopping along with us.

Oh, poor Chief Aunty! At least it was dead...I'll never forget the time my kitty brought a live mouse into the house!

Your card is gorgeous and clever! Cute little mouse, beautiful use of colour and wonderful design. Thanks for sharing it at House Mouse and Friends Monday Challenge.

What a cute mouse! Love the colours and layout too.
Lorraine x

This is adorable Lesley, I love the image.
Kevin xx

Ooh I bet your little puddy tat's name was mud whilst the rodent was on the loose!!!
You've done a great job on the card.
Hugs
Jane

oh Lesley such an elegant halloween card and of course adore the star of the show gorgeous colouring, thanks for joining us at the House Mouse and Friends Monday challenge, hope you enjoyed the hop too
Hugs Kate xx

So cute Lesley!! Beautifully coloured and designed!! Looking forward to your SU party - hope it's still on as I have loads of holiday money to spend!!! Hugs, Julie(waiting for flight at Newark)xxx

I think your cat and mine would be good friends. Except mine goes for the live versions! This card is too cute. Too cute, you hear? Thanks also for playing at Cupcake this week. Good Luck. X

Fantastic card, Lesley!! Adorable image and great design, I love, love the layout! Thanks for joining us at Cupcake and good luck! Hugs Delphine xx

Hi Lesley, what a super cute pumpkin card! A little mouse, not a rat lol (love your kitty story)! Thanks for joining in with us at Cupcake, Shelly x

This is very sweet and i like the simplicity of it. Great job. Thanks for playing in House Mouse and friends blog challenge.

This is very sweet and i like the simplicity of it. Great job. Thanks for playing in House Mouse and friends blog challenge.

Oh wow this is so sweet! Adorable image and fabulous papers!! :)