Less is More and something to make you laugh

I almost never make clean and simple cards.  All that white space frightens me and when I have tried to make them they take me FOREVER which I always feel rather defeats the object, especially given that most of them end up in the bin!  I do, however, check out the Less is More challenge site every single week because I'm fascinated by the creations of the DT and the entrants and I often want to have a go even though I almost never do.  This week they want us to be inspired by their own Blog Header and I was - even though the inspiration might appear quite tenuous. 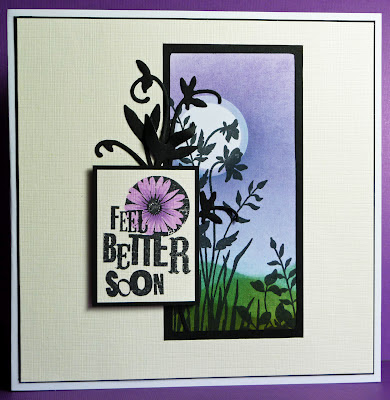 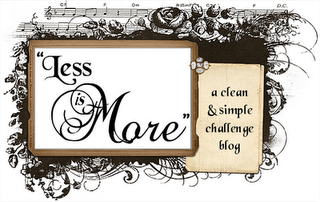 I liked the black and the flowers and the flourishes and the over- lapping large and small boxes and after not less than four aborted attempts, I finished my card.
Of course, to make the connection more obvious I should really have used tan but somehow I ended up with purple. Best laid plans and all that.
I am also entering my card into the challenge for CAS at Simply Stamping.   I used floral images from my Just Believe Stampin Up set as silhouettes over my landscape.  My sentiment is by Inkadinkado and is part of a set my best matey, Julie, gave me and I added a Marianne Die leafy flourish.

And now for something to make you laugh:
it really is worth reading...
It's an e-mail that was sent to me by my friend who lives abroad about his Colonoscopy: (ps "Aintree" is a famous, regularly shown on TV, horse racing track and a Caber is like a large tree log which is hurled for sport - odd, I know)

"Having felt a degree of discomfort in the bowel dept I decided to "go private" abroad as a visit to the was several weeks hence.
The doc reeled off an ever more terrifying list of potentential causes, suggesting a return home for a colonoscopy. Or he could do it here for slightly less than the national debt.
It only took a day of anguish to sign up with the Bummeister for the following week. At this point, along with smoking or non smoking, I should have ticked a "yes to anaesthesia" box had there been one.
The night before one needs to imbibe 10 pints of foul tasting emetic within 4 hours. Mmmmm.
When I was a kid I had a plastic rocket you half filled with water and then pumped to high pressure with a bicycle pump. Upon releasing the catch the missile erupted from the ground at huge velocity spewing water in the opposite direction with equal force. That approximates to the first hour on the toilet the following morning.
When greeted by the Bummeister I was told to reveal my lower half. A pretty nurse appeared and as I slipped into sluttish blue paper trousers stylishly worn with the gaping fly to the rear I almost felt coquettish as she pretended not to notice me, and busied herself with what looked like the working core of the Tardis.
I was invited to recline on a sumptuous paper pad as the main man discussed ice hockey, and continued to do so for far to long.
When he said he was going to insert a camera in my rectum I was reassured by the smile on the nurses lips. The camera I did not expect was the Aintree outside broadcast camera c1950, accompanied by the entire crew including the continuity girl.
The intense pain was only relieved by comparison to the subsequent pain as he inflated my colon with air, puffing on the rubber bulb like Hyacinth Bucket doing her aphids.
It was it this point he took a call on his mobile whist poking meters of cable ever deeper with the gusto of a Victorian chimney sweep.
We eventually reached the small intestine whereon he pointed out I could see the light shining through my body wall if I wished. As the light glowed I could only think "phone home".
As he withdrew the instrument he paused occasionally to crop polyps like an excited school girl harvesting wild flowers for her mum.
Finally the last few feet revealed what looked like the main street of Hobbiton or Bag End with cosy hobbit holes to the left and right. I expected him to point out Frodos house but he muttered something about Diverticulosis, which I took to be a minion of the Dark Lord.
Anyway, as the equipment finally fell out like a Scotsman’s caber completing its summersault I was left with a belly like the Hindenburg and the feeling you get as the lights go up after the movie."
Posted by Grenouille Greetings at 08:40

Remind me NOT to see your friends specialist then!!!

As a passionate fan of purple I am in AWE of your fab card.

I agree your card has rather a tenous link to our header, but it is rather gorgeous!
The header you have copied has a black space as the "Less is More" is actually on a transparent panel, rather than white. I did think I changed it to be a white backgrouond on the one in the post....will go check
Thanks so much
mandi
"Less is More"

I like the inspiration you pulled from the header - it came together for a beautiful card!

It's a lovely card and well worth the effort. Love your friend's story - hope he is OK!!

This is beautiful Lesley, wonderful colouring and brilliant stamping.

Absolutely gorgeous card. Write note to oneself to make more of em.
Having just read another funny story from another blog and picked myself up off the floor think I will just stay put on the floor and roll around instead. So funny.Your friend certainly has a way with words.
Hugs Mrs A.

Lesley your card is really pretty. I think you have a great eye for placing the images on your card just perfectly...beautifully done Lesley!

Boy your friend really has a way with words. LOL Thanks for the laugh Lesley. :-) Your card is nothing to laugh at though. Beautifully designed sweetie! Hugs!

Hi Lesley!
i loooooooove your C&S card so wonderful. love he colors your choose and the add of back! fab coloring too! i'm in love!
hugs
céline

tenuous link or not lesley i think your card is stunning,i love it,i have major problems with CAS designs and you have nailed it.
Your friends email is fabulous,he has such a way with words and having once been through the procedure i absolutley agree with Every SINGLE WORD...lol
tracey

ah someone that feels the same way as me about CAS cards, not that you'd know it from your card, it's stunning, I love the different stamps you've used together.
Thanks for joining us this week at Simply Stampin'
Kelly xx

Fabulous card Leslie , I love all of it , You made the image so beautiful well done Great colours.
I read your friends story... I hope he;s much better now after all that ..... Hugs Elaine

What a pretty card... I love the purple.

Beautiful CAS! Don't be afraid of white space! Love the sponged background here! Thanks for joining in the SSC! xx

This is a fabulous CAS card and your sponging is just beautiful! Thanks for joining us this week at Simply Stampin'

Well I do like your purple card. Stunning.
Love your name( same as our daughter) and your story is fascinating!

Adore your card, it is rather unusual for you but nevertheless stunning and you should do this style more often!
Had to laugh about your friends story, fabulous writing, wouldn't want to experience the actual story though myself *lol*

I love your take on this challenge, Lesley! You made it your own!

This is beautiful, fab sponging! Thanks so much for sharing your lovely card with us at Simply Stampin'! Hope you play along with us again soon! Ruth x

Excellent writing skills and so darn funny! I think your CAS design is gorgeous and love the purple and black. Beautiful work