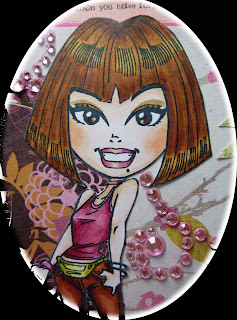 Kenny K is celebrating it's first year anniversary with a massive blog hop and awesome prizes with an "anything goes" challenge theme.   Having played along with the hop and seen so many absolutely gorgeous makes with the new releases, I decided on the fabulous "sketch" at Sketch n Stash for the basis of my card.  I used the image instead of the tall thin central strip and I moved the circle to the side so that it wouldn't conceal all of the panel behind it but hopefully the sketch is still visible.   My Kenny K image is new, bought especially for this challenge.  Isn't she fab!  And my papers are relatively new from the Prima Melody pack.  I haven't used this combo before but I wanted to use mostly "pink and brown" in keeping with the colour challenge at A Spoon Full of Sugar.  I added some gem swirls and three tiny pearls in the bottom left hand corner for the "pearls and swirls" theme at My Mum's Craft Shop. 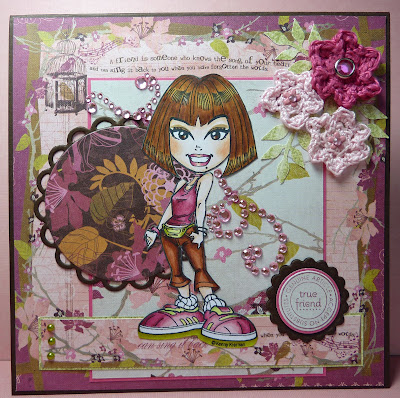 My Mum left yesterday after a two week stay.  We had a lovely time.   We went to see War Horse in London on Saturday and then out for  meal.  It was a great day but she was especially tired aferwards.   During her stay, she has been making me little crocheted flowers with some new yarn I purchased.  Adding some punched leaves, I have used three of them on this card.  Aren't they pretty?  My image is coloured with Copics and my sentiment is by Stampin Up.

Posted by Grenouille Greetings at 16:53

Great image, great colouring, great card, I like the crochet flowers too.

Fabolous card,love the colours you used!
Thanks for joining KKKG this week!
Heidy

I LOVE this card.. WOW it's stunning.. I love the flowers... I had to laugh becasue when my mom comes she does the sametihing.. Makes me flowers.. LOL.. I never have time..
big hugsmy friend or little PQ!!
Janiel

Wow a superb creation Lesley, love all your bling too.

Thanks for popping by my blog.
Happy crafting
Tracy x

Your crochet flowers look fab too! :)

WOWZER girl!! Your coloring is just gorgeous!!! Love your card and your brilliant design hun!! I just wanted to stop by and say hello!! Hope you're enjoying your Summer!! HUGS

Fab card! I like all the details. Thanks for joining us at MMCS challenges this week! Hugs!

your kenny k girl is just wonderful, so pretty

Good luck in the challenges, hugs Sarah-Louise My Blog

The shimmer that is coming off of her dress!! I can just feel the soft fabric. Fabby dossy. Hugs Mrs A.

Love the colours you have used and all the wonderful elements (especially your Mum's crochet flowers).

I am pleased you had a good time together.

Gorgeous card Lesley, fab image and the papers are lovely. And well done to your mum for the wonderful crocheted flowers, they look amazing,
Love Sarita xx

This is just gorgeous Lesley. I love the colours and the cute image. Hugs Michele x

Just popping back to thank you for playing along with us at Sketch N Stash - still very gorgeous!! Juliexx

Stunning card, your colouring is fantastic! And those flowers are very pretty indeed, lucky you to have them made for you! :-)
Love, ALex