A Kaboodle of Crafty Cupcakes

The theme at Crafty Creations this week is "Boyz to Men".  They want to see a creation for the "men in our lives".   Now as every lady knows out there - a tried and tested hair stylist definitely counts as an important man in our lives (provided he is male of course) and mine has gone missing.   Well, not exactly missing, but he has left the salon and I am devastated.  He has been cutting and (yes, I admit it) colouring my hair for most of my adult life and he is a genius.  He has been there through my marriage, divorce and remarriage.  He knows more about me than most of the people I know and whereas he has taken some quite lengthy sabaticals in recent years for family reasons, he has now left the salon and I can't bear to lose touch with him again.   So I've made a card to take to the salon this weekend when one of his lovely colleagues is going to cut my hair in the hope that they will forward it to him.
I could not resist playing along with Kaboodle who want us to "use those scissors".  I don't think this is quite what they had in mind so I have also cut out a teeny tiny butterfly which is pasted between my Tim Holtz ticket and my newspaper article torn strip.   My papers are Prima Reflections with a little Papermania for the paper button and Cricut cut lettering.  The top of the DP reads "The greatest Treasures are invisible to the eye but found by the heart".   The Cricut didn't cut all the way through the mount under the letters so I had to cut them out with a hand held blade in the end.  I added a "mysterious" sticker for extra embellishment. 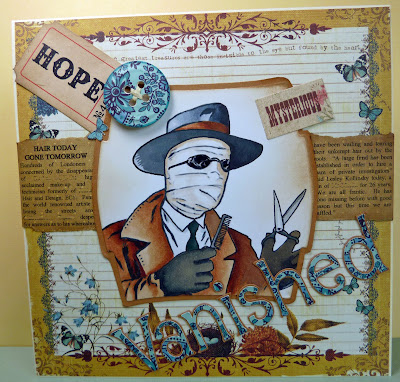 ﻿
Cupcake Craft, meanwhile, are celebrating their 150th challenge and have given us the opportunity to choose any of their last 150 challenges.  I opted for their number 22 which is "brown plus one" other colour.
The image is one I was pointed to a while ago to which I added scissors and a comb   He is coloured in Copics and I have glazed his glasses.
I wrote a faux newspaper article, and added it instead of a central ribbon.  You will hopefully be able to read it if you want to if you click on the photo to make it larger.  I have redacted my stylists name and salon and location with Photoshop before posting here on the basis that if he wishes to remain invisible then I probably shouldn't display his details on my blog.   Some of the text of my article is hiding beneath the image but the brain is a wonderful thing and it is possible to get the gist of it even with some of the words hidden from view.

Posted by Grenouille Greetings at 10:44

He he great card. Thanks for joining us this week at Cupcake and good luck x

such a neat, creative card! so many wonderful details to enjoy!
thank you so much for joining us at Kaboodle Doodles this week! :)

look at those details. And the butterfly cutwork too since the butterflies are so small. Great card!

Thanks for joining us at Kaboodle Doodles!

This is fabulous Lesley love how you added the scissors and comb.
Hope you find you missing man.
luv
Debby

What a great card! Thanks for joining us at Cupcake this week x

A great card, love the design and colours. Thanks for taking part in my challenge at Crafty Creations this week. Good Luck! Hugs Christine x

Fabulous!! Thanks so much for joining in the Crafty Creations challenge!
smiles,Deena

Fabulous!! Thanks so much for joining in the Crafty Creations challenge!
smiles,Deena

ooh you found it then!! Fab colouring and such a perfect image for your theme!! Love the addition of the hairdressing implements!! Hope you find your man!! Hugs, JUliexx

I thought I had seen and commented on this one but obviously not... I really like this, it has a great movie feel to it and the colours are up my street as well!
Love,
Alex