Even though I shouldn't say so myself - I am thrilled with this card I made. The idea started in my head a few weeks ago.  I first tried to make it using vellum but my ink still hadn't dried four days after stamping so I gave up on that media and then this week there are two challenges for which it would have been perfect so I decided it had to be made now.   Unfortunately I just managed to miss Polka Doodles which needed a shaped card but Cupcake Craft wanted circles so I am entering there.  I am also in time for Sophisticat which has an oriental theme and Colour Create wanted red, black and off-white.    Hubby's middle daughter is getting married next weekend and she and her new hubby are honeymooning in Japan. I knew I wanted to make a Japanese Lantern shaped card and I dry embossed the back in stripes to emulate the hoops of a real paper lantern. 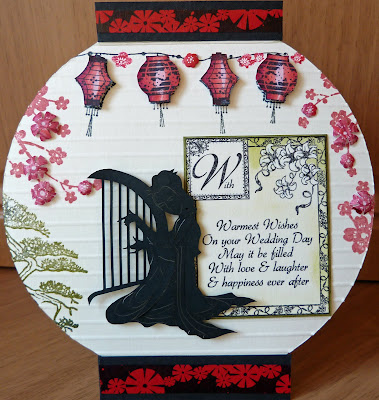 The little Japanese tree stamp is by WS Designs, the hanging lanterns (coloured with Copics), stamped blossoms and the black on red trim round the base and top are by Inkadinkadoo and the sentiment is by Design Objectives for Papermania.  The silouette is one from a set I bought maybe three years ago from Lakeland Plastics back when they sold craft stuff in their stores.  I had some trouble making little blossoms to stick on and only added a handful after which I ran out of fingers that were not covered in silicone glue! They are made from K&Co paper and hand touched with a white gel pen.  Thank you for stopping by I really do appreciate your comments!
Posted by Grenouille Greetings at 16:07

what a stunning card,the different images you have used on the card are perfect and make this card one of the most original i have seen
love it
lalkygirl[tracey x]
x x

Wow! this card is so stunning, the Japenese feel is right up my street love it!
Teresaxx

Hi there lesley
wow wee!! sorry for my outburst but that was what it made me shout when I clicked on your blog.
this is so beautiful love that script its all just perfection.
good on you girl!!

Lesley you are doing such awesome work! I love when you post a new card...I can't wait to see what new creation you come up with! This is so unique and just simply gorgeous! Thank-you so much for your sweet comments on my blog...I so appreciate it!

Great card. Thanks for joining in at Polkadoodles this week.

I love the names you concoct when you combine challenges! As for your card, please be delighted with it as it is completely stunning, the detail is amazing. I've not forgotten about the flowers, just seem to have 3000 things to do first. I'm on holiday next week, but will get to you eventually, sorry! x

HI Lesley Wow what a gorgeous card. Thanks for joining the Sophisti-cats challenge this week. luv gina xx

Hi Lesley, This is STUNNING and I do mean STUNNING!!!
A WOW card!!
Thank you for joining us at Colour Create!
hug, Janiel

Such an exquisitely exotic creation!! I am totally in love with this beauty! This is most definitely going to be a gift to be cherished forever!!!

I also had to mention that I love the name of your blog:o) Aren't little froggies just the cutest?!? And your right...they are always ready to greet you with a welcoming "ribbit":o) Too cute and very witty!!!

This is stunning, I love the shape

Thanks for joining us at Sophisticats this week

Hi Lesley, what a beautiful card. Love the colour scheme and unusual shape. Thanks for joining in with my challenge over at cupcake craft this week. Hugs, Denise x

Whoa!! This is so unique! Very chic and pretty! I love the look and those little lanterns!!!! Love it!
Hugs, Dena

Oh wow! Fabulous card for our challenge! Thanks for joining us at Cupcake!
Hugs Shelly ;)

Yes you should brag about this card!! It is stunning.x

'Tis a stunning card, Lesley and so original-you sure do have some fab ideas! Juliexx

What a truly beautiful card!

Such an elegant card! Thanks for playing at Polkadoodles this week.

this is exquisite ! thanks for joining in at polkadoodles this week

Wow, what a stunning card. I'm glad you got round to making for our challenge. Thanks for joining us at Sophisticats this week. Hugs Tracy x

Thanks for playing along in our shaped card challenge at Polkadoodles this week! Definitely a work of art! Cheers Claire x

I love the sentiment and those beautiful lanterns.

Wow this is so beautiful. I love the silhouette..What a terrific combo of colors..They will love this..Great job.

Wow! a stunning card with such a personal touch for the happy couple - I am sure they will love it!
hugs, annie x

Ohhh wooowwwww, this is absolutely
SUPER BEAUTIFUL!!!!
Love it!! :-)
have a wonderful day.

WOWZER!! This is just GORGEOUS!! I love the colors and the details!! So detailed and striking with the colors!! :) TFS! HUGs

This is absolutely stunning. I love everything about it.
Love
Valxx

Really lovely and unusual card Lesley.
Thanks for joining the Polka Doodles shaped card challenge and hope to see you again.
x

Hi Lesley...beautiful creation!! sorry this is so late but You are the Winner of Sophisticat Challenge for week #24 ORIENTAL.
Please email me at

with your snail mail so I can get your stamped images out to you.